Akha In Thailand has 8 different types, Ulo Akha, Lomee Akha, Phamhee Akha, Naka Akha, Peak Akha, Aker Akha, Ajor Akha and Uphi Akha. The original background, they were living in China and moved to Burma before moved to Thailand during the economic problem in China. First area that they get into was Maechan, Chiang Rai in 1892 and the next border was Maesai.
Today, Akha people are living in the north of Thailand mostly in Chiang Rai, Chiang Mai, Tak and Prae. 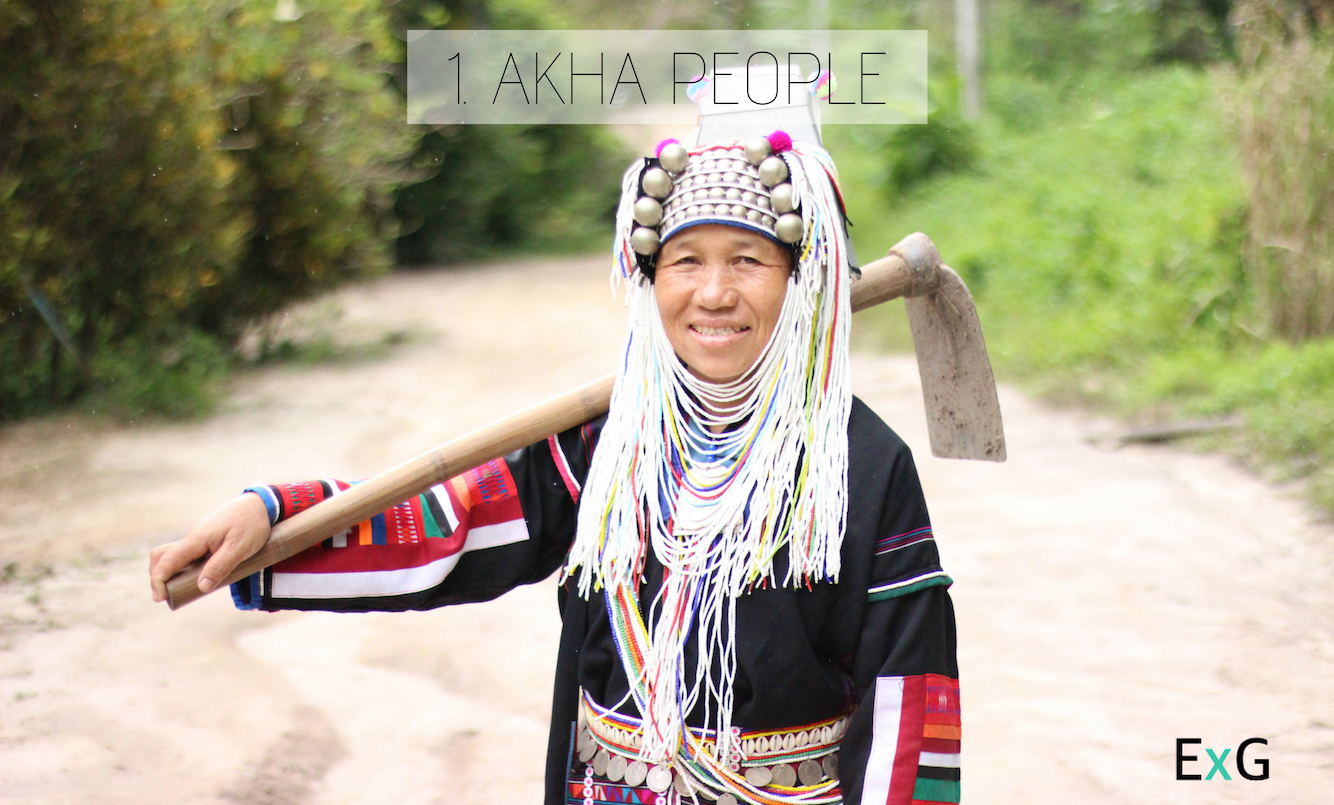 Akha people have own language is “Akha Language” to communicate to each other and also have own style for writing. It’s based on English alphabets and accents. The Akha language’s creator were western people who came to Thailand to share the story of “Catholic Religion” and they just help this tribe to have own language and invited them to believe in Jesus instead of their own beliefs.
Now a-day, the new generation of Akha who was born in Thailand can also speak two languages, Akha and Thai languages. They became more welcome in this country… even not hundred percent but it’s better than before.
At the beginning when Akha tribe arrived in Thailand, we did not have a voice, or any kind of services.
Now, there are a lot of Akha people is becoming entrepreneur and also some can works in the government system as Thai people. This is the power of language that can change Akha people to deserve a better life and can have voice in this country. A great words can use for this are “opportunities in life come in the right time”. 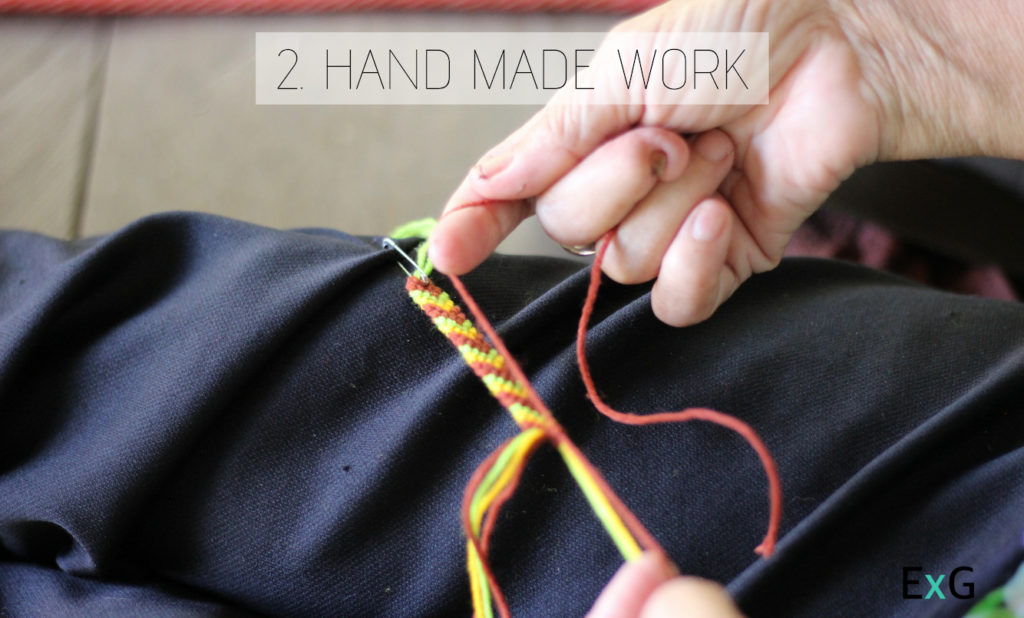 They love to work at home after farming. The main hand made work is embroidery stuff for the traditional dress for women or to sell to tourist and carving things for men. They make everything on own style and keep original color to produce their products to make it unique and real.

Akha people love to stay close to the mountain, as far away from the river as possible, due to their belief. They do farming for living. They loves to have really simple life, with a beautiful house in bamboo with the roof in thatched and also have the animals in the house for food like chicken and pig. They eat very simple food, always with chili paste, steam vegetables and some soup….. 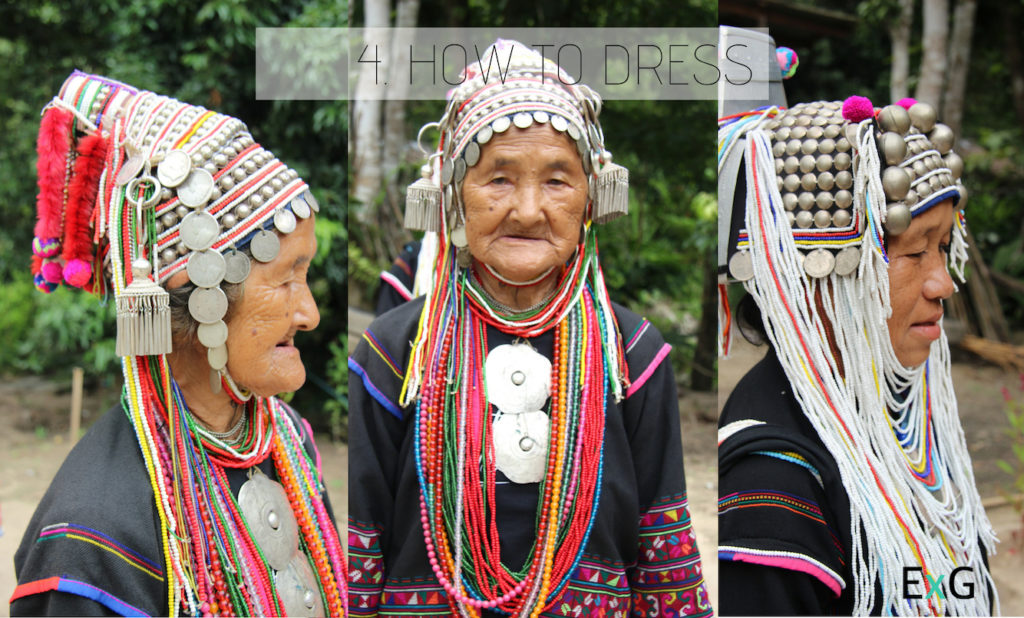 The black and red with silver accessories is making by handmade is one of their style. Akha tribes has very beautiful dress on own style, women wear hat full of accessories from feather in red color with silver on the hat, a great handmade shirt in colourful base on black and red is most attractive for them, black mini skirt on top with the small belt that just for more beauty, the two legs covered by traditional socks and put the two last things with silver belt and colorful necklaces. For men, more simply for men they just have to wear a hat with some red feather around, traditional jacket in black and red and long black trousers. 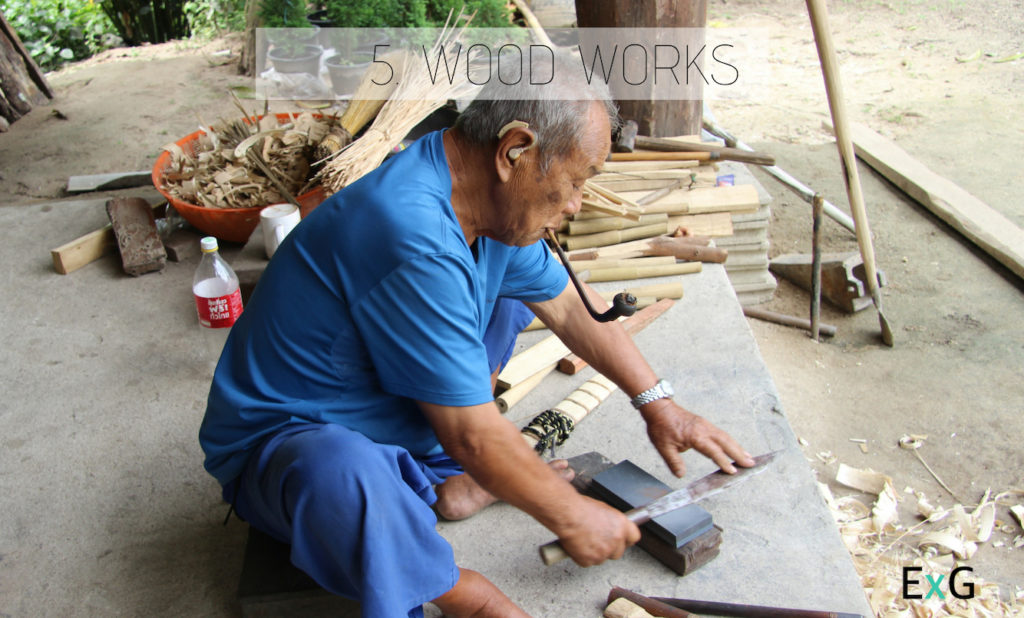 Wood works must be for men, after a big hunting day in the jungle, they will have a good time at home by doing the wood works like making wooden gun, wooden knife, wooden bow and weaving from bamboo. All kind of woods they take it from jungle and own farm. 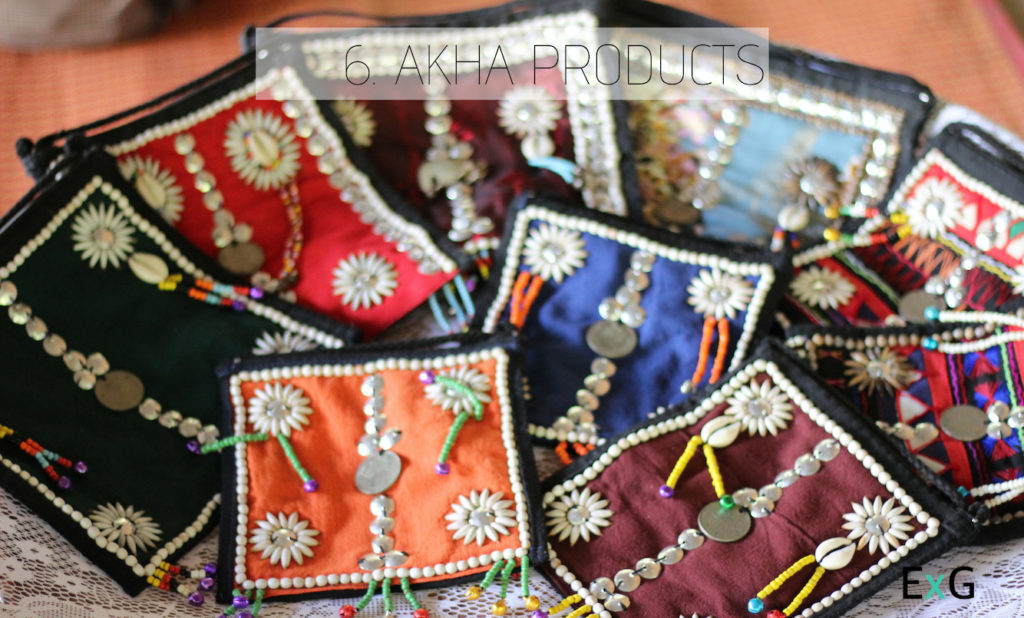 Akha products are usually hand made. They use a lot of colors, even if the main one is red. They have their own fashion, with typical hat, bag, belt, shirt, mini skirt, yarn bracelet and products for home decoration. Those are usually made with cotton from their own farm, feather from birds or chickens. 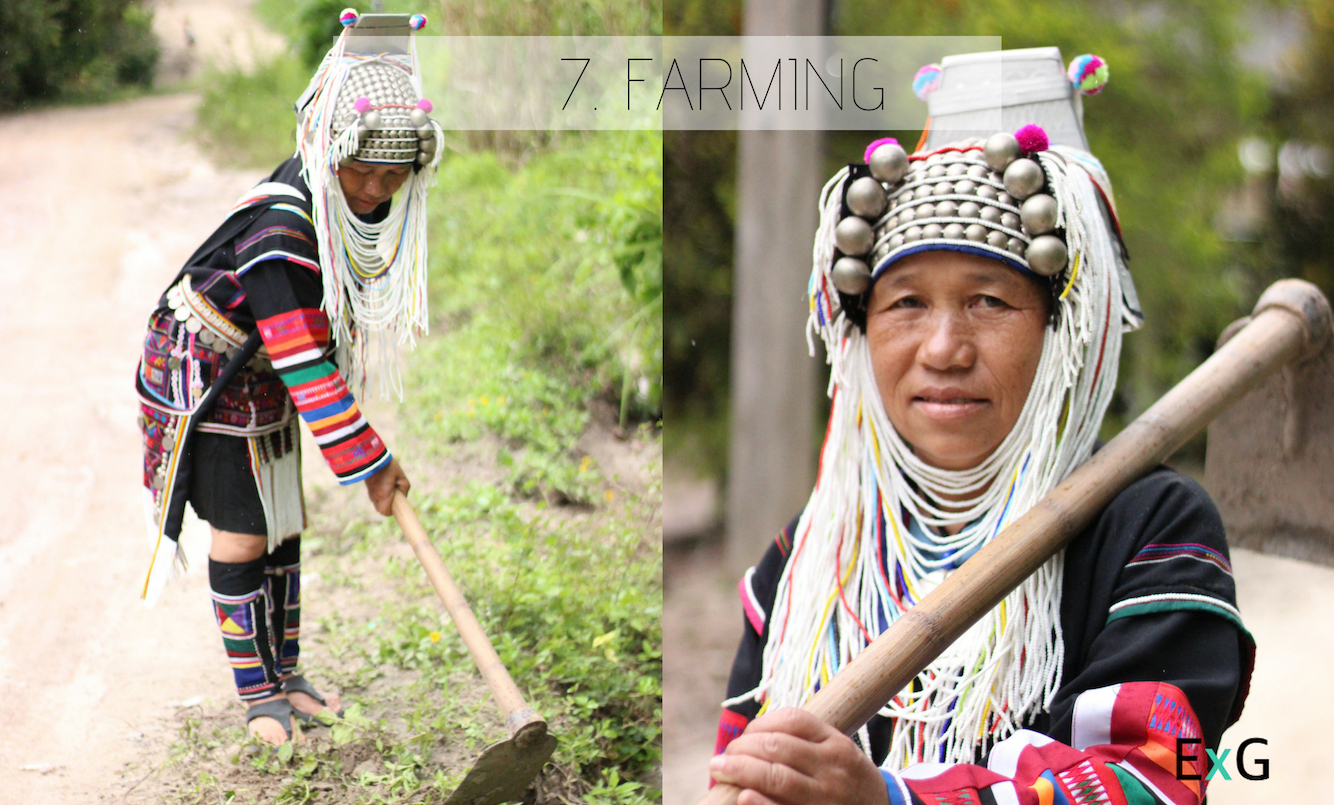 Everyday, they just work at their own farm to plant the rice for themselves, corn for them and also for animals, another vegetables and herbs for eating and selling. Another important work for Akha’ women is needlework for own dress and for selling to tourist as well to make more money for living. 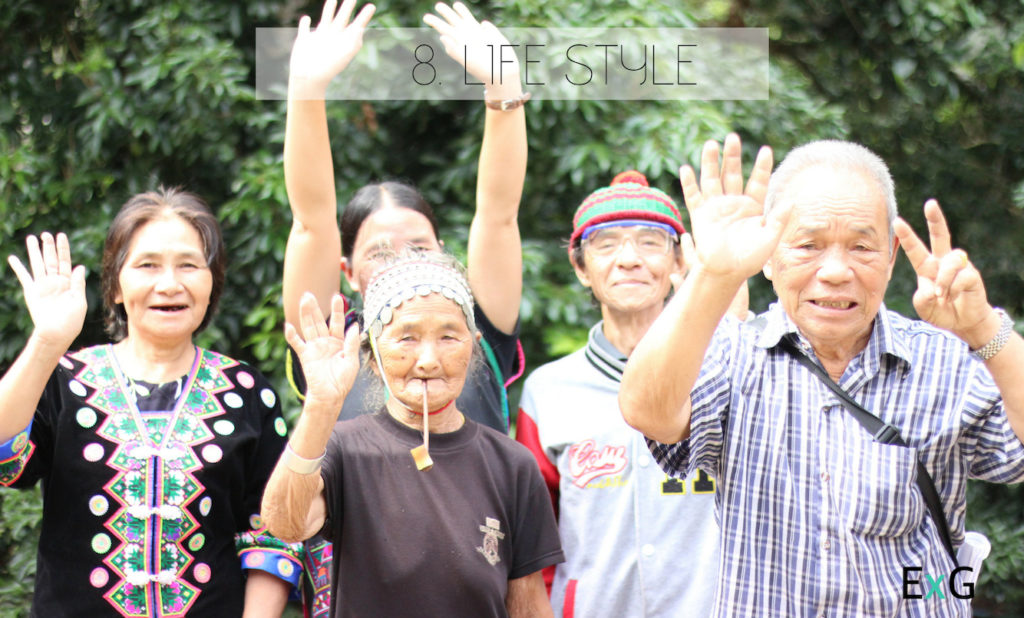 In the past, Akha tribes believed in spirits. First thing you will see in the past if you had a chance to visited some villages, in front of the village (the main door to get inside) had the statues of woman and man to protect the bad spirits to get inside the village.

Another thing is that Akha people are not surprised by spirits apparitions.

One of my memories is a woman whose body began to shake. It was her spirit getting in her body to know when someone is getting sick and how to cure them. Healer are still part of the tribe, even if they is a hospital with more regular doctors now.

Another memory is the lamentation of a pig, surrounded by people who were killing him. Not for cruelty or for eating, but as a sacrifice, a way to improve someone’s health. The pig was sacrificed to the spirits instead of a human life.

The Akha’s new rice cerebrations , they took the rice from their own farm in the early morning to avoid the animal in the jungle because they believe that if they meet any kind of animals on that day will be bad luck for them that’s why they have to do it early morning. After that get dried a bit under the sun and cook the rice and share to everyone in the village and cerebrate a day.

During the night, there is a traditional dancing for enjoying with everyone in the village.
Akha’s swing ceremony, this is one of the most important thing for Akha’s tribe that they can can know what will happens for the next year by this ceremony.

This ceremony takes 4 days, Akha’s women they will dress up with the most beautiful dress that they have for this important ceremony and enjoying the moment with everyone in the village.

In this 4 days there is a thing that called “Rice Cracker” that only can do it in this special day. This swing can play just in the 4 special days and after that just keep it until the next cerebration.

If you want to be a guest at a real Akha village with one of our local guide, click here.

This error message is only visible to WordPress admins

Please go to the Instagram Feed settings page to create a feed.